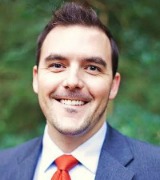 A native of Birmingham, Brian literally grew up in the family business of beach vacation home investing.  His parents, Steve and Becky Harris, bought their first beach home in the secluded Fort Morgan area of Gulf Shores in 1983 when Brian was only a few months old. “When I say that I have seen the business from every angle it means that I have even seen it looking around a bottle!.”

After graduating with a MBA from Auburn University in December of 2009 Brian moved with his wife Ashley to Spanish Fort which is across from Mobile, AL about an hour north of the Gulf Coast. “We chose Spanish Fort for several reasons but mainly for its easy access to Mobile. The idea was that we would get ‘real jobs’ and help with the family business on the side.” But the great recession and the dismal job market in the area had other plans.

“The road to where I am now was not an easy one. After trying nearly everything to land a decent job I decided to get my real estate license. I didn’t see any other doors opening up and I knew so much about the business already, it seems like a path to something.”

In 2010 Brian obtained his real estate agents license. In 2012 he took and passed his brokers exam and in 2013 officially opened Harris Realty Group. “The main focus of the company was to help other owners maximize their return on the beach investment properties. I think that we have done that, and done it for a very competitive price!” The company has grown from around 20 properties to closing in on 100 in July of 2016. “We grew really fast.  Which was great but it was not without its stresses. If I had it to do over we would have tried to grow in a more controlled fashion. I’m just excited to hear from our guests and our owners and hear about how happy they are. It makes it worth it.”

“The plans for the future include expanding the sales side of the business and continuing to focus our energies on delighting our owners and our guests. It is a really exciting time!”

Personal Notes: Brian and Ashley have been married in 2007 and have two beautiful daughters: Ava and Vivien. They live in Fairhope, AL.